Berlin is known as one of the major centres of European street art. In the German capital, this artistic movement is considered a way of life rather than an artistic practice. What is the history of Berlin’s urban art and where are the highlights?

Street Art in Berlin and its history

The history of street art in the German capital is directly linked to that of the Berlin Wall. This had been erected to prevent Germans from the GDR (German Democratic Republic), who were in Soviet-occupied territory, from converging on the FRG (Federal Republic of Germany). But very soon, what appeared to be a military separation device became a veritable blank canvas with messages of hope or protest.

Indeed, in 1970, when the GDR (East Berlin) was still controlled by Soviet forces, only West Berliners were allowed to approach the wall. They would come and paint tags and graffiti on it to protest or show their solidarity with the Germans kept on the other side of the wall. The wall continued to be covered with drawings until 9 November 1989, when what was considered the wall of shame came down.

Today, several years after these events, Street Art can be found all over the streets of Berlin. A section of the wall that resisted demolition has even become a veritable open-air museum. These remnants of Berlin’s past continue to inspire many street artists in countries divided by a border in the form of a wall.

What are the names of the famous street artists in Berlin?

If stencils, graffiti, murals and collages can be found all over the streets of Berlin today, it is thanks to talented local and international street artists. Among the most famous in the German capital is the extremely talented Blu, who amazes even the most ardent urban art enthusiasts with his works. Very active and committed, he has created several murals on the walls of Berlin. And behind many of his metaphorical works, there are messages about politics, the environment or denouncing violence.

El Bocho is also a street artist whose work is well known to Berliners. Of German origin, he creates beautiful, colourful portraits scattered all over the Berlin metropolis. He also creates many successful poster collages, the most famous of which is his favourite character, “Little Lucy”. Considered the most popular and mysterious street artist in the world, Banksy has made a name for himself in Berlin with the works of art that he covers on the walls of certain districts. Like the “little rats” that he scatters all over the place.

JR and Victor Ash are two French artists who are also well-known in the Berlin street art scene. The former is a famous photographer known in Berlin, especially thanks to his series “City Wrinkles” which can be seen on the facades of 15 buildings in the city centre. The second has become a cult artist in the German capital because of his piece entitled “Astronaut Cosmonaut“. It depicts a floating astronaut and is now one of Berlin’s most famous murals.

What are the iconic street art locations in Berlin?

The Berlin metropolis is one of those rare cities that knew very early on how to tolerate the practice of Street Art. This is perhaps the reason why it is now one of the biggest strongholds of European Street Art. And even though urban art can be found everywhere in the city, there are certain places and districts in Berlin that represent emblematic places for this artistic practice.
Among the Berlin districts where to admire urban art, there are:

The East Side Gallery, which is the longest piece of the Berlin Wall still standing. At 1.3km long, it features 118 works by artists of 22 different nationalities. This makes it a large open-air gallery. One of the most iconic pieces found there is the “kiss of friendship” between Leonid Brezhnev and Erich Honecker.

The Friedrichshain district is a must-see for street art in the German capital. Very much alive artistically, this part of the city is known for the diversity and the incredible amount of urban artworks one encounters there. However, these works are ephemeral and the old ones are regularly covered by new ones.

– The Kreuzberg district, where splendid tags and murals such as Blu’s famous “The Pink Man” or the “Yellow Man” by the Brazilian twins Os Gêmeos can be found in almost every street.

– The Mitte district which contains the most famous tourist attractions of the capital (Brandenburg Gate, Museum Island, etc.). The streets in this part of the city offer a plurality of works by well-known artists such as El Bocho or Banksy. The Haus Schwarzenberg is an art gallery also located in the centre of this district. It features a good number of murals by local artists and street artists from all over the world.

– The district of Prenzlauer Berg, a quiet little corner of the Berlin metropolis. In this charming village, you can admire small stencils, tags, collages and murals hidden here and there. 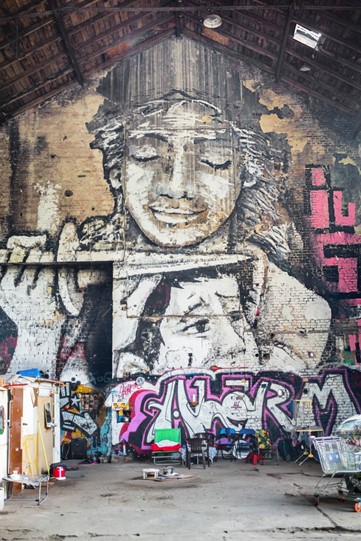 Stencils, tags, graffiti, poster collages, murals: the walls of Berlin are lined with urban art. Berlin’s street art, which emerged during the conflict that led to the separation of the city by a wall, is nowadays one of the major attractions of the German capital and has managed to inspire a spirit of artistic revolt in other parts of the world.

SUAF2021- Press conference at the Residence of France at Saigon

For this first time in Vietnam, the Residence of France opens its doors to 8 emerging Vietnamese street artists.

El Marto is a resident artist in Burkina Faso. He has been painting the country’s walls for many years, depicting everyday scenes and advocating the coming together of people.